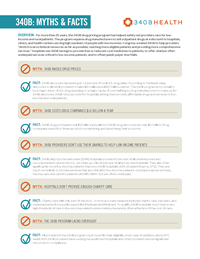 FACT: 340B discounts represent just 1.7 percent of total U.S. drug sales. According to the latest data, discounts to all 340B providers totaled $6.1 billion in a $457 billion market. The 340B program is too small to be a major driver of U.S. drug spending or a major cause of cost shifting by drug manufacturers to make up for 340B discounts. 340B reduces costs for hospitals, letting them provide affordable drugs and services to low income and rural patients.

FACT: 340B drug purchases total $16 billion annually but 340B drug discounts are only $8.2 billion. Drug companies spent four times as much on marketing and advertising their products.

MYTH: 340B PROVIDERS DON’T USE THEIR SAVINGS TO HELP LOW-INCOME PATIENTS

FACT: 340B disproportionate share (DSH) hospitals provide 60 percent of all unreimbursed and uncompensated care in the U.S., yet make up only 38 percent of all acute care hospitals. They also treat significantly more low-income patients than non-340B hospitals (42% of patient load vs. 27%). They are much more likely to provide services that are critical for low-income patients— substance abuse services, trauma care, and care for patients with HIV/AIDS—but are often underpaid.

MYTH: HOSPITALS DON’T PROVIDE ENOUGH CHARITY CARE
FACT: Charity care tells only part of the story. A more accurate measure includes charity care, bad debt, and underpayments from public payers like Medicaid and Medicare. To qualify, 340B hospitals must meet a very high threshold of care to low-income patients where reimbursement is often a fraction of the cost of care.

MYTH: THE 340B PROGRAM LACKS OVERSIGHT

FACT: All providers in the 340B program must recertify their eligibility every year. In addition, since 2011, nearly 800 340B providers have undergone audits and hospitals and other providers devote significant resources to compliance.

MYTH: 340B PROVIDERS SHOULD BE REQUIRED TO REPORT MORE INFORMATION TO THE GOVERNMENT

FACT: 340B providers believe in transparency and are open to discussing ways to expand the information shared with the government (hospitals, for example, already publicly report their costs and charges to Medicare and report the many ways they care for low-income patients to the Internal Revenue Service). However, the proposals currently introduced in Congress would not provide the public with a complete picture of all of the care and services 340B hospitals provide with the savings achieved through the 340B program. Drug manufacturers, too, should be more transparent about their 340B ceiling prices. The U.S. Department of Health and Human Services should implement a congressional requirement to make the prices pharmaceutical companies charge under the 340B program available to 340B providers via a secure website.

MYTH: THE 340B PROGRAM HAS GROWN TOO BIG AND IS OUT OF CONTROL

FACT: Drug discounts for 340B providers total only 1.7 percent of total drug spending in the U.S. In 2010, Congress recognized the challenges rural communities face in getting needed care and expanded 340B to critical access hospitals, rural referral centers, and sole community hospitals. While this added more than 1,200 hospitals to the program, they account for only 3 percent of 340B drug purchases. In addition, the number of hospital child sites listed in 340B has been inflated due to changes the U.S. Health Resources and Services Administration (HRSA) made to its registration procedures. HRSA used to require registration of offsite locations that received shipments of 340B drugs. Now, in addition to offsite locations, the agency also requires hospitals to register each service provided in an offsite location, even if all of the services are provided in a single facility. This caused a spike in number of child site listed in HRSA’s 340B program database.

MYTH: THE RECENT MEDICARE CUTS TO 340B HOSPITALS WILL SAVE MEDICARE MONEY AND SAVE MEDICARE BENEFICIARIES MONEY IN REDUCED CO-PAYMENTS
FACT: The cuts will not save Medicare money. The $1.6 billion cut from 340B hospitals is being redistributed under Medicare’s Outpatient Prospective Payment System through higher payments for non-drug services. Most beneficiaries will not save money: 86% have third-party payer coverage that helps cover their cost-sharing costs and the higher payment rates for other services will increase their cost-sharing.

MYTH: THE 340B PROGRAM HAS LED TO CONSOLIDATION IN THE ONCOLOGY FIELD
FACT: Numerous studies have shown that consolidation in the U.S. health care market is occurring due to multiple factors including changes in reimbursement by Medicare and private insurers. Unlike private oncology practices, 340B providers accept all patients, regardless of their ability to pay or insurance coverage. 340B disproportionate share (DSH) hospitals treat more low-income patients with cancer who are dually eligible for Medicaid and Medicare than private physician practices. “Dual eligible” patients tend to be the poorest and the sickest beneficiaries covered by either program.

The 340B drug pricing program is working as Congress intended and is an essential part of the U.S. healthcare safety net. Savings from the program support expanded care for low-income and rural patients who might otherwise not have access to needed care.