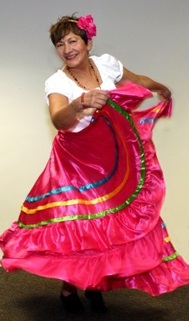 Guadalupe Mendoza discovered she had stage-4 breast cancer in 2008. The disease had quietly spread to her bones and liver by the time she knew something was wrong.  Guadalupe was also uninsured and quickly spent all her savings on medical care – including a double mastectomy.

Thanks to the 340B program and first-rate care at nearby Glendale Adventist Medical Center, Guadalupe received chemotherapy infusions for free until she could get enrolled in Medi-Cal, the state’s Medicaid program, with the help of the hospital’s staff.

“So far I’m doing really, really good,” Mendoza says.  “I’m in remission now and I work part time. The 340B program made a big difference for me.”

The Mexico City native and American citizen works in a restaurant as a server. And Guadalupe now has the grace to spend time with friends and family. She also participates in the dance program at the hospital’s cancer center. “It’s an opportunity to have good time, exercise and have fun,” says Mendoza.

She will have to be on chemo for the rest of her life, but Mendoza stays optimistic and works to help other cancer patients at the hospital.

“I try to meet with them. I take them to doctor appointments and help them forget the terrible situation they’re in.”