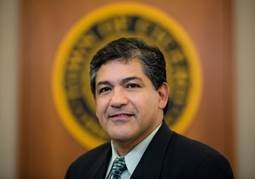 Gustavo Rosales was laid off from the Spanish language broadcasting company Telemundo in 2006. He turned to freelancing but when his health began failing in 2008, Rosales found he fell through the cracks in getting medical care.

“I was earning too much to get public assistance and too little to afford private health insurance,” he recalls. Rosales found some information about the University of Illinois Chicago Mile Square clinic and decided to take his diabetes and weight problems there for help.

The best part? Mile Square offered Rosales a sliding scale for payment. “They made it so easy to become one of their patients,” he says.  “They wanted to help with my high blood sugar.” Each doctor visit cost Gustavo just $20 and his monthly meds came to only $15. When Rosales later needed to go on insulin,a medication assistance pharmacy technician helped him apply to a prescription access program to cover the cost. His care was made possible, in part, by savings from the 340B program.

Rosales continues to work as a part-time consultant and has since signed up for insurance under the Affordable Care Act. He still uses the Mile Square Health Center for his medical needs.

“They treat you right and don’t look down on you,” he says.